Create an Account - Increase your productivity, customize your experience, and engage in information you care about.

We are looking for the original Boston Post Cane that was presented to the town of Charlton in August 1909. This cane was given to the eldest citizen in town and the tradition continued. At one point, the cane never was returned to the town.

We are asking all to look in their attics, cellars and any place that your family would store items to see if this piece of history is there. Contact the committee and we can make arrangements to pick it up. Thank you for taking the time to try to help us find the original cane and return it back to the town. 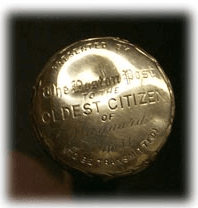 In August 1909, Mr. Edwin A. Grozier, Publisher of the Boston Post, a newspaper, forwarded to the Board of Selectmen in 700 towns* (no cities included) in New England a gold-headed ebony cane with the request that it be presented with the compliments of the Boston Post to the oldest male citizen of the town, to be used by him as long as he lives (or moves from the town), and at his death handed down to the next oldest citizen of the town.

The cane would belong to the town and not the man who received it. The canes were all made by J.F. Fradley and Co., a New York manufacturer, from ebony shipped in seven-foot lengths from the Congo in Africa. They were cut to cane lengths, seasoned for six months, turned on lathes to the right thickness, coated and polished. They had a 14-carat gold head two inches long, decorated by hand, and a ferrule tip. The head was engraved with the inscription, --- Presented by the Boston Post to the oldest citizen of (name of the town) --- "To Be Transmitted."

The Board of Selectmen were to be the trustees of the cane and keep it always in the hands of the oldest citizen. Apparently, no Connecticut towns were included, and only two towns in Vermont are known to have canes. In 1924, Mr. Grozier died, and the Boston Post was taken over by his son, Richard, who failed to continue his father's success and eventually died in a mental hospital.

At one time the Boston Post was considered the nation's leading standard-sized newspaper in circulation. Competition from other newspapers, radio, and television contributed to the Post's decline and it went out of business in 1957. The custom of the Boston Post Cane took hold in those towns lucky enough to have canes. As years went by some of the canes were lost, stolen, taken out of town and not returned to the Selectmen or destroyed by accident.

In 1930, after considerable controversy, eligibility for the cane was opened to women as well

The Selectmen activated the Boston Post Cane Ad-Hoc Committee, a five-member board, on April 8, 2008, and charged them with the responsibility of creating the criteria needed so that the cane can be presented fairly to the eldest citizen of the Town of Charlton.

This committee created the criteria as directed to do so. Further, it presented it’s recommendation to the Board of Selectmen and asked the Board to consider making this committee an appointment per the Town’s bylaw so that there will always be someone charged with finding the oldest resident in town when needed.

The committee has established criteria which was approved by the Board of Selectmen, to be considered as a recipient of the Boston Post Cane.

Download a Nomination Form. Please note that we have a current recipient, but nomination forms will be placed on file for future consideration.

View Most Recent Agendas and Minutes