Create an Account - Increase your productivity, customize your experience, and engage in information you care about.

Harvesting is not something we think of in winter, but in New England, this kind has traditionally occurred in January and February. That is the time when the conditions for production are most likely to be ideal.

In the early 1900s, ponds and lakes in the area were harvested when the ice was at least 12 inches thick. After the snow was scraped, it was scored to make squares, separated using special ice saws and pikes, and loaded into icehouses. Packing the ice tightly, and stuffing with sawdust or hay, helped to maintain temperatures so that the ice was available later in the year. 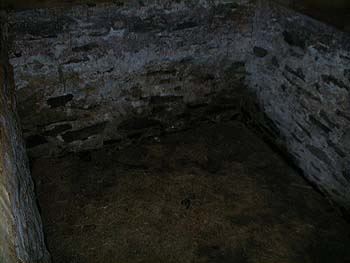 Here in Charlton, the town's Historical Commission is preserving an ice cellar located at 93 Fitzgerald Road. It is believed to be the only intact ice cellar that remains in town. That does not mean that ice was not a business in this area. It appears ice was transported out of the area by train since a big icehouse was reported to have existed near the Depot.

The Brigham Milk Company, of Boston, is negotiating for the purchase of land on the shores of a pond at Charlton Depot, whereon to build an immense ice house. The company already has a large ice house at Charlton Depot, but larger storage capacity is needed. (Cold Storage and Ice Trade Journal, December 1906).

Smaller operations also existed in town. Bill Hultgren related that his father-in-law, Wilbur Johnson, harvested ice from Upper Ashworth, today's Upper Sibley Pond, for William Gustafson's ice cellar in the 1920s. Some sources indicate the Village Improvement Society harvested ice at Wabash Pond. There is a picture that shows a crew that worked on Tucker Pond, off Stafford Street. Charlton Historical Society now owns some of this equipment and would like to know more about it.

If anyone has information about Charlton ice harvesting operations, please call Cindy Cooper at 508-248-7840.